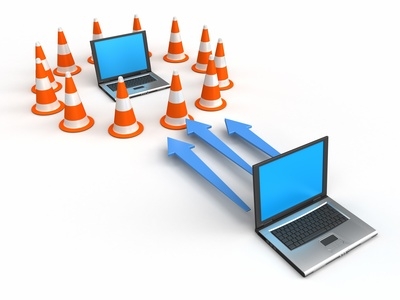 This article covers the basics of DoS / DDoS attack protection and how to reduce its risk.

DDoS-attack is short for Distributed Denial Of Service Attack. The main characteristic of this type of computer crime is that the criminals are not intended to enter into a protected computer system to steal or destroy data. The main purpose of this attack is to paralyze the attacked site. DDoS-attack is a derivative of DoS and differ only a large number of requests to the server with a different IP address. This is why criminals collect their chain Trojans infected computers and cause them to turn to the server, making it not withstand such loads. The first reports of DDoS-attacks were known in 1996.

In most cases, global attack leads to financial losses on the part of the attacked. For example, if a commercial site will drop for a few hours, then it would damage the business, and if for a week, then the owner of the resource may well go under.

Denial of service can be made ​​in two ways: using software vulnerabilities of victims and by sending a large number of specifically composed of network packets (flood). The first method consists in that using the buffer overflow vulnerabilities, by sending the code to the server that performs DoS. Since the attack will be “inside”, then after a very short time the object will be “frozen” or is disconnected from the Internet. This method does not require large computational resources hitter, but this attack uses security vulnerabilities, which in itself complicates the task. The second method is by using of brute force, which practically does not require any special skills. The idea is to send as many as possible requests to the server (those requests also could be the huge number of normal packets, such as GET-requests for HTTP-server hosts.) The fact that the server receives a data packet that is processed by the server. If a packet arrives, but the server is busy receiving or processing of another package, then coming back a request is put in place, taking up part of the system’s resources. In carrying out DoS-attack server sends a large number of packets of a certain size. In this case, the server’s response is not expected. As a result, due to the fact that the server is overloaded with information, it is either disconnected from the Internet, or “frozen”. In any case, normal users some time can not use the services of the affected server. 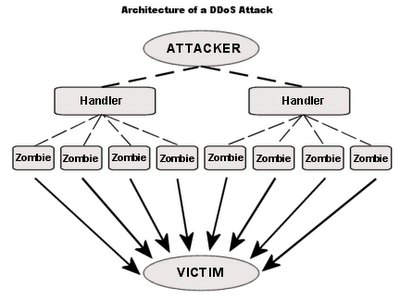 Schematically, DDoS-attack looks like this: on the selected server as a victim collapses a huge amount of false requests from multiple computers from different parts of the world. As a result, the server spends all its resources to service these requests and is virtually inaccessible to ordinary users. Cynicism of the situation lies in the fact that users of computers to which requests are sent are false, may not even be aware that their machine is being used by hackers. Programs installed by hackers on these computers are called “zombies” (examples of such programs could be Trojans). Perhaps this preparatory stage is the most time-consuming for an attacker.

Most often, attackers during the DDoS-attacks are using three-tier architecture, which is called “cluster DDoS”.This hierarchical structure includes:

DDoS software was originally produced in a DDoS “peaceful” purposes and used for experiments on the network bandwidth and their resistance to stresses. Over the years, this software is constantly being modified. For more detailed understanding of DoS-attacks, I will review five most popular types of DDoS-attacks:

The most dangerous are the programs that use multiple types of attacks described. They are called TFN and TFN2K and require a high level of training. One of the latest software for organizing DDoS-attacks is Stacheldracht (barbed wire), which allows you to organize a variety of types of attacks and avalanches broadcast ping requests with encrypted communications between controllers and agents.

Of course, in this review I’ve covered only the most well-known programs and methods of DDoS. In fact, a much wider range of programs and is constantly updated. For the same reason, it would be naive enough description of universal reliable methods of protection from DDoS-attacks. Generic methods do not exist, but the general guidelines to reduce the risk and minimize damage from attacks include such measures as the competent configuration features anti-spoofing and anti-DoS on routers and firewalls. These features limit the number of half-open channels, preventing overload the system.

Here are several ways you can protect yourself against DoS attacks

As a webmaster, I perform analysis of the site for malware and viruses and implement reliable protection from them. This is part of the Website Maintenance Services that I offer for my clients. Please visit Website Analysis Audit services page for more details. Please call to schedule your free consultation or simply  Contact Me  by submitting your inquiry online.
Share with your friends:
Tweet
Best Practices of Well Designed Websites Website Transfer to a New Server – Step-by-Step Guide

State of the Web 2015: One-third of the Sites are Volnerable and Cracked

Creation of Effective Websites
Vital Webmaster, LLC creates effective websites of any complexity at affordable prices for all companies and entrepreneurs. My clients can order websites containing the most popular feature sets. There is also the possibility to order an exclusive site with any set of functions and with any design.
Redesign of Existing Websites
Website redesign usually affects not only the appearance of the website, but also this process changes the functional part of the site which translates it to another, more convenient and efficient content management system. I offer a comprehensive approach to redesign your site!
Creation of Banners for the Website
Creating banners requires a serious thinking, because a beautiful ad unit is a business card for your site and conveys important information about your products or services to your website visitors. Vital Webmaster, LLC will provide your with creative banners that will catch attention of your visitors.
Programming for the Websites
Programming for a WEB site helps to make certain graphic elements “live” and fills to their functionality. Vital Webmaster, LLC adds the functionality to your website by programming such applications as photo albums, news, subscription forms, contact forms, applications, registrations, forums, etc.
Development and Implementation of CMS
Vital Webmaster, LLC builds web-applications of any complexity (from personal single pages to e-shops or portals) that correspond to the needs of the customer. Also Vital Webmaster, LLC helps to implement CMS for your website that adds additional features and flexibility to managing the content on your site.
Implementation of Visitors Tracking System
Site statistics is the most important information for the owner of the site, because you want to know how popular the site is and what products and services your visitors are looking for on daily basis. Vital Webmaster, LLC helps to implement such systems for your website and all your resources on the web.
Submission to Directories and Search Engines
Do you have a great website, but no one knows it exists? You’ve come to the right place. Begin the path of traffic to your site today with Vital Webmaster, LLC. I submit your web site to the world-famous search engines and directories. I monitor submissions success and provide you with visible results.
Website Hosting
Vital Webmaster, LLC works with great hosting companies that provide hosting services for more than 12 years. The servers are available 24 hours a day, 7 days a week and are easily accessible from any region of the world. When you order my webmaster maintenance services, I make sure that your site is setup and hosted for free.
Implementation of Website Security
In recent years, the number of attacks aimed at the Web server, has increased significantly. Vital Webmster, LLC knows how to protect your website against sql-injections, website hackings, choose correct server settings, etc.
Transfer of the Website to a New Hosting Server
Often times when transferring to a new hosting provider your old website, many of us find it to be a very complicated process. Vital Webmaster, LLC can do that for you to ensure that your existing website is reachable on a new server.
Website Maintenance
Website maintenance is a package of measures aimed at maintaining proper health resource on the Internet. Vital Webmaster, LLC offers ongoing website support services.
Search Engine Optimization (SEO)
Vital Webmaster, LLC provides Search Engine Optimization (SEO) services that help to ensure that a particular virtual resource appears high on the popular search engines.
Internet Marketing
Internet Marketing is one of the most effective advertising tools on the Internet. Its uniqueness lies in an integrated approach to promote the site. Vital Webmaster, LLC provides a comprehensive Internet marketing services for the website promotion.
Website Design for eCommerce
Whether you are starting a new business or continue doing your existing business, Vital Webmaster, LLC can provide eCommerce solutions for you.
Creation of Logos for the Website
Logo is not only a mark on the page of a site but is the first commercial brand of the company, where the shape and the font, color, and image have their exceptional value and transmit certain information to the consumer. Vital Webmaster, LLC has experience in creating logos and corporate identity.