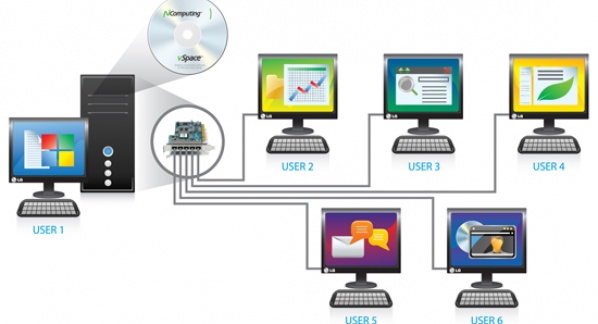 Today every administrator may have heard about virtual machines and how to use them in their business. By the way, many have probably used virtual machines as the main server, and today we see the benefits of server virtualization, and there are actually quite few.

To begin to talk about Virtualization, lets look at what is a virtual machine or in the server virtualization so called a hypervisor (virtualization environment), and the software that emulates your hardware, and thus makes it possible to create a single platform.

And now let’s move on to all the benefits of using virtual machines in my organization as servers.

Pros of the virtual machines

1 . First, it should be noted that you have in your office a server or servers on a just released space. Since the use of virtual servers do not need a lot of place, it requires only one or two powerful servers.

2 . If we reduced the number of physical servers, respectively, we have reduced power consumption , heat dissipation and of course, there is a reduction of noise . This, by the way, can serve as a compelling reason for the introduction of virtual machines.

3 . Another weighty reason to host the enterprise virtualization, is the fact that it will cost you much less than if you bought a physical server. This is a powerful argument for the bosses!

4 .  Virtualization eliminates the need to allocate a separate server for a specific software or operating systems. In other words if you are using old software and old operating systems that are running very old software, and you can not give it up, as it is necessary for the production process, the hypervisor comes to aid, where you just create one virtual instance where you setup the needed OS, without using a separate server.

5 . Another significant, in my view, advantage is that the only server you will need to backup is a single physical server where you host your virtual machines, or only files on hard drives, which are installed. If you’ll consider the benefits of any hypervisor (VMware or Hyper-V), they have a lot of different functions, including the backup, replication, virtualization and so much more.

6. Also a plus is the centralized management of these virtualized servers, ie you are connected to the control console or open the snap on the server host and can easily, for example, restart any virtual server. Now, to reboot the guest operating system is much easier and faster.

7 . If you have something wrong inside of your virtual machine you simply and quickly restore the main virtual hard disk from the archive. If someone says, “and if the host itself fails?” We also have an archive of all virtual hard drives, we only need to install the operating system (or just the server hypervisor) to the new server to add the role of the hypervisor in the case of Hyper-V and restore all the virtual machine disks, even without the need to customize anything!

8 . Another advantage is the fact that if you have one physical server and if something does not function, for example, the power supply burned or hard disk broke, you will need to buy only one physical item for replacement rather than multiple items for each individual machine.

9. Now it should be noted that if you suddenly decide, for example, to add more RAM to all servers (sort of speak, try to upgrade your virtual machines) all you need is to open one physical machine and insert upgraded items. This way you can upgrade other parameters, such as hard disk space, the number of network adapters and other items in your server.

10 . With server virtualization, we are able to expand our operational fleet of servers, i.e. you will have a dynamic infrastructure .

From all of the bullets above we can see why it is necessary to use virtualization in any business and why it is so beneficial and convenient. Personally, I think, that every business will prefer virtual servers, and virtualization is already widely used by large enterprises.

Now let’s talk about the implementation of it, ie for those products that can be used to implement a server virtualization.

There comes to mind two very popular hypervisors: VMware ESX (or ESXi ), and also, of course, Microsoft Hyper-V. These products are implemented as separate systems such as Microsoft Hyper-V Server 2008, or included with the operating system in this case, Microsoft Server 2008 (from VMware as well as a server system and how easy it is to be installed on an existing OS). In the case of back-end system, you simply connect to it through the console.

These virtual machines support a lot of varieties of guest operating systems, especially VMware and Hyper-V.

Cons of the virtual machines

If we talk about the disadvantages, oddly enough, it is difficult to effectively implement virtualization. You will need to purchase a powerful server or more, especially if you have a large enterprise.

But if you are a small organization, you may want to use a less powerful server, but as you know, you will run into the issue of the minimal number of guest operating systems which your server will be able to handle. By the way when choosing a server for virtual machines, pay attention to the amount of RAM. A general rule of thumb: the more, the better! In other words, the amount of memory depends on how many guest operating systems you can install. For a small business, for example, you only need two or three virtual servers with 8 gigabytes of RAM. For each virtual server, you can choose how much RAM should be installed, in our case, for example, we give up a 2 gig of RAM to a single host, and create three virtual servers with 2 gigabytes of RAM dedicated to each (making it total of 8Gb of RAM). Or, you can create two virtual servers, for example, with the first of 4 gigabytes, and two servers with 2Gb RAM. You are in charge how much RAM should be allocated to each server.

That’s basically all I have to say about virtualization. If you are going to implement a virtual server for your business, make sure you plan carefully plan the implementation and review the license agreement for the product that you favor.

Selecting VMware as the virtualization platform. Why?

VMware, established in 1998, is a pioneer in virtualization platform for x86 machines.

VMware products in its functional characteristics is superior to competitors’ products. For example, VMware offers the most compact and efficient hypervisor which provides better performance of virtual machines and allows you to put on the same server more of them (ie, increase the “density” of virtual machines – VM density ).

VMware infrastructure virtualization platform has effective means to reduce costs, improve reliability and security applications to ensure the required level of service and a necessary step on the path to cloud computing.

Love at the First Word, or How to Place Words (Write Content) for the Site

Review of the Best Github Repositories for the Week March 27

Creation of Effective Websites
Vital Webmaster, LLC creates effective websites of any complexity at affordable prices for all companies and entrepreneurs. My clients can order websites containing the most popular feature sets. There is also the possibility to order an exclusive site with any set of functions and with any design.
Redesign of Existing Websites
Website redesign usually affects not only the appearance of the website, but also this process changes the functional part of the site which translates it to another, more convenient and efficient content management system. I offer a comprehensive approach to redesign your site!
Creation of Banners for the Website
Creating banners requires a serious thinking, because a beautiful ad unit is a business card for your site and conveys important information about your products or services to your website visitors. Vital Webmaster, LLC will provide your with creative banners that will catch attention of your visitors.
Programming for the Websites
Programming for a WEB site helps to make certain graphic elements “live” and fills to their functionality. Vital Webmaster, LLC adds the functionality to your website by programming such applications as photo albums, news, subscription forms, contact forms, applications, registrations, forums, etc.
Development and Implementation of CMS
Vital Webmaster, LLC builds web-applications of any complexity (from personal single pages to e-shops or portals) that correspond to the needs of the customer. Also Vital Webmaster, LLC helps to implement CMS for your website that adds additional features and flexibility to managing the content on your site.
Implementation of Visitors Tracking System
Site statistics is the most important information for the owner of the site, because you want to know how popular the site is and what products and services your visitors are looking for on daily basis. Vital Webmaster, LLC helps to implement such systems for your website and all your resources on the web.
Submission to Directories and Search Engines
Do you have a great website, but no one knows it exists? You’ve come to the right place. Begin the path of traffic to your site today with Vital Webmaster, LLC. I submit your web site to the world-famous search engines and directories. I monitor submissions success and provide you with visible results.
Website Hosting
Vital Webmaster, LLC works with great hosting companies that provide hosting services for more than 12 years. The servers are available 24 hours a day, 7 days a week and are easily accessible from any region of the world. When you order my webmaster maintenance services, I make sure that your site is setup and hosted for free.
Implementation of Website Security
In recent years, the number of attacks aimed at the Web server, has increased significantly. Vital Webmster, LLC knows how to protect your website against sql-injections, website hackings, choose correct server settings, etc.
Transfer of the Website to a New Hosting Server
Often times when transferring to a new hosting provider your old website, many of us find it to be a very complicated process. Vital Webmaster, LLC can do that for you to ensure that your existing website is reachable on a new server.
Website Maintenance
Website maintenance is a package of measures aimed at maintaining proper health resource on the Internet. Vital Webmaster, LLC offers ongoing website support services.
Search Engine Optimization (SEO)
Vital Webmaster, LLC provides Search Engine Optimization (SEO) services that help to ensure that a particular virtual resource appears high on the popular search engines.
Internet Marketing
Internet Marketing is one of the most effective advertising tools on the Internet. Its uniqueness lies in an integrated approach to promote the site. Vital Webmaster, LLC provides a comprehensive Internet marketing services for the website promotion.
Website Design for eCommerce
Whether you are starting a new business or continue doing your existing business, Vital Webmaster, LLC can provide eCommerce solutions for you.
Creation of Logos for the Website
Logo is not only a mark on the page of a site but is the first commercial brand of the company, where the shape and the font, color, and image have their exceptional value and transmit certain information to the consumer. Vital Webmaster, LLC has experience in creating logos and corporate identity.